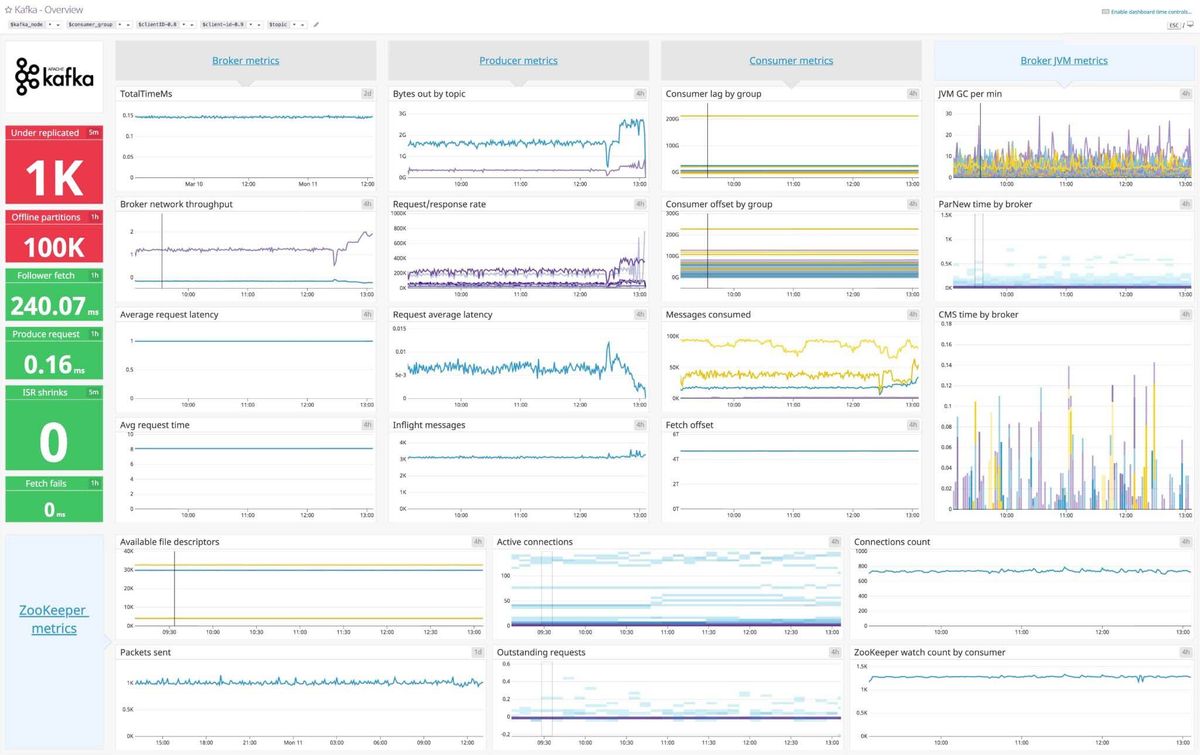 Datadog’s default Kafka dashboard. If I don’t know a lot about Kafka, how can I interpret this?
If it isn’t obvious by now, I don’t think that agents are the future. In fact, I think that agents will become less and less important over time, and that developers will begin to incorporate observability planning into their code designs. There’s a few reasons that I believe this to be the case.
It’s striking to see how OpenTelemetry has changed the conversation about monitoring and observability. Perhaps it’s unsurprising, given its popularity and the level of commitment that the open source and vendor community have given it already. Kubernetes has integrated OpenTelemetry for API server tracing, and multiple companies have started to accept native OpenTelemetry format data.

OpenTelemetry is the second-most active CNCF project, after Kubernetes.
OpenTelemetry enables developers to spend less time relying on agents for ‘table stakes’ telemetry data, and more time designing metrics, logs, and traces that give actionable insights into the business logic of your application. Standard attributes for compute, database, serverless, containers, and other resources can lead to a new generation of performance and cost optimization technology. This latter step is crucial, as it’s not enough to simply log everything and age it out; We need to measure what matters in the moment, while preserving historical trend data for future use.
The world that gave us agent-based, per-host monitoring isn’t the world we live in today. Systems aren’t a collection of virtual machines or servers in racks any more; They’re a multi-faceted mesh of clients and servers scattered across public and private networks. The agents that exist in this world will be smarter, more lightweight, and more efficient. Instead of doing all the work themselves, they’ll exist more as stream processors, intelligently filtering and sampling data to reduce overhead, save on network bandwidth, and control storage and processing costs.
One thing I try to keep in mind when I look to the future is that there’s millions of professional developers in the world who don’t even use the state of the art today. The amount of digital ink spilled over endless arguments about observability, what it is and isn’t, and the best way to use tracing to monitor a million microservices pales in comparison to the number of people who are stuck with immature logging frameworks and a Nagios instance. I don’t say this to demean or diminish those developers or their work – in fact, I think that they exemplify the importance of getting this next generation right.
If observability becomes a built-in feature, rather than an add-on, then it becomes possible to embrace and extend that observability and incorporate it into how we build, test, deploy, and run software. We’ll be able to better understand these complex systems, reduce downtime, and create more reliable applications. At the end of the day, that gives us more time doing things we want to do, and less time tracking down needles in haystacks. Who could ask for anything more?

Austin Parker is the Principal Developer Advocate at Lightstep, and has been creating problems with computers for most of his life. He’s a maintainer of the OpenTelemetry project, the host of several podcasts, organizer of Deserted Island DevOps, infrequent Twitch streamer, conference speaker, and more. When he’s not working, you can find him posting on Twitter, cooking, and parenting. His most recent book is Distributed Tracing in Practice, published by O’Reilly Media.

We protect your privacy.
Focus on the topics that matter in software development right now.
Deep-dive with 64+ world-class software leaders. Discover how they are applying emerging trends. Learn their use cases and best practices.
Stay ahead of the adoption curve and shape your roadmap with QCon Plus online software development conference.
InfoQ.com and all content copyright © 2006-2021 C4Media Inc. InfoQ.com hosted at Contegix, the best ISP we’ve ever worked with.
Privacy Notice, Terms And Conditions, Cookie Policy