Smart speakers are everywhere this year. So far, we’ve seen new entries from Apple, Amazon, Google and Sonos. Now Microsoft is finally ready to join the party. The Harman Kardon Invoke is the first speaker to feature Microsoft’s Cortana virtual assistant. Since it’s coming from a brand known for audio gear, it promises better sound than the competition. And for the most part, it succeeds. The Invoke is miles ahead of Amazon’s original Echo and Google’s Home when it comes to audio quality. But Cortana still has to mature a bit before it can successfully take on Alexa.
The Invoke is a large, cylindrical speaker that bears a striking resemblance to the Echo. It’s just as tall as Amazon’s speaker, except wider toward the bottom. There’s also a huge difference in build quality: The Echo is made entirely of plastic, while the Invoke features a more premium-feeling metallic case, with only a bit of plastic around the base. Even the control dial feels much better than the Echo’s; it turns more smoothly and feels like controlling a piece of high-end audio gear. Don’t forget, Harman Kardon has been building things like receivers and speakers for years. 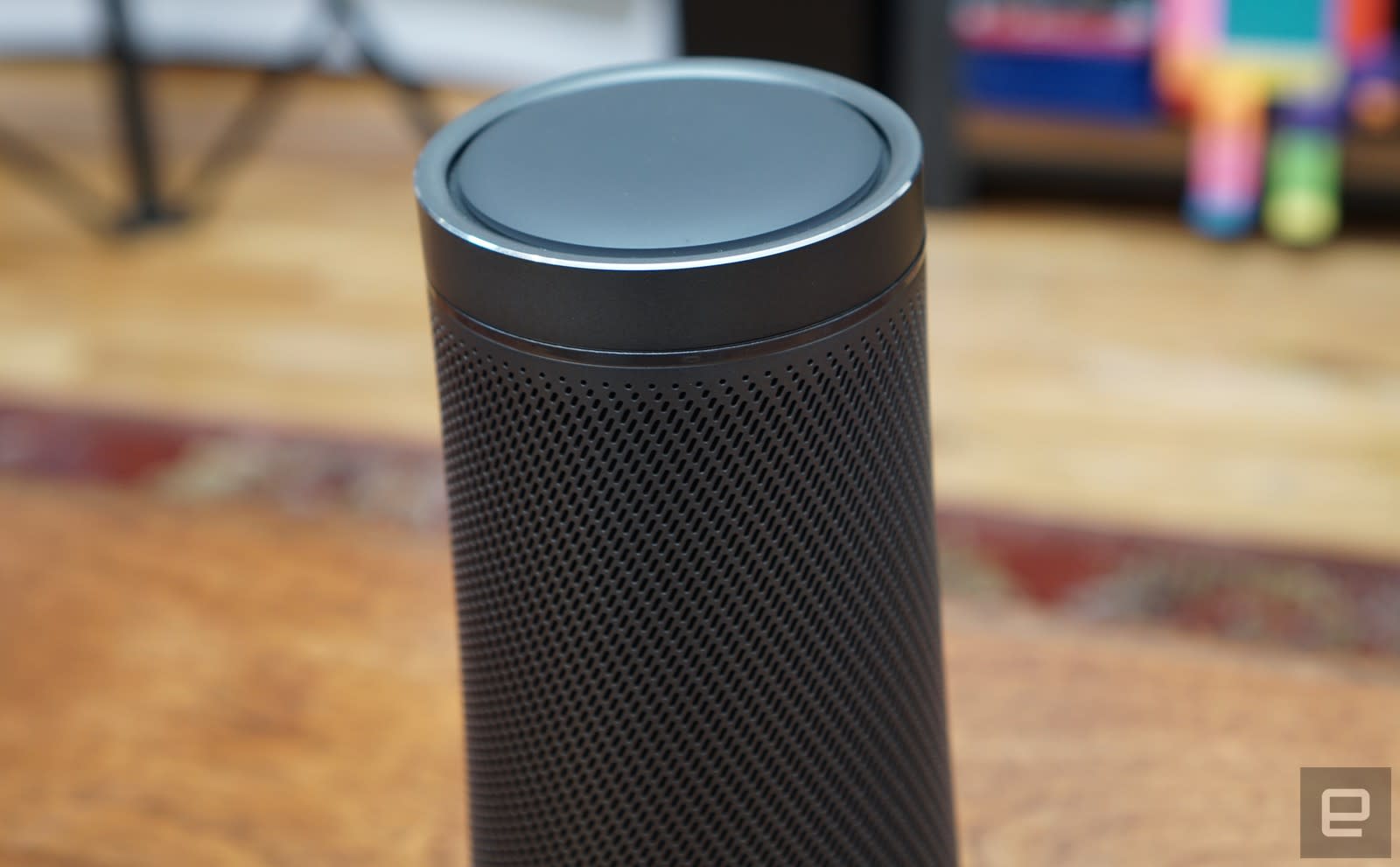 There’s a touch-sensitive area at the top, as well as a frosted display that shows you when Cortana is listening and the volume level. That top portion also houses the seven-far-field-microphone array, which lets the speaker hear you no matter where you are in a room. Overall, it’s a pretty streamlined device. There are only two buttons in the back, which let you mute and pair the speaker with Bluetooth devices. There’s also a diagnostic micro-USB port nestled near the power connection (which could be used for upgrading firmware or troubleshooting issues). My only real issue with the speaker is its ridiculously short three-foot power cord. You can easily augment that with an extension cord, but would it have been that hard to include something longer?
Under the hood, the Invoke features three tweeters, three woofers and two passive radiators that fill up most of the case. By comparison, the new Echo has just one woofer and one tweeter. The Invoke even has more speaker hardware than the Sonos Play 1, which has only a single woofer and tweeter as well. Apple’s forthcoming HomePod, meanwhile, has four small tweeters and a woofer. I’ll admit, it’s tough to compare speakers when you’re just looking at what they’re made of. What’s more important is how they sound, and this speaker sounds great.
Devindra Hardawar/Engadget
To set up the Invoke, you’ll need Cortana’s iPhone or Android app. Alternatively, you can use a Windows 10 PC. The speaker shows up as a device in Cortana’s settings, and it takes just a few seconds to connect to it. After that, all you need to do is say “Hey Cortana” and start issuing commands. You could ask about the current weather or the latest news, or for directions. For the latter, it’ll read off basic navigation instructions and send a copy to the Cortana app on your phone. These are all things Cortana has been able to do for years on PCs and smartphones, but having it available in a standalone speaker is quite useful.
I started out testing the Invoke by doing just about everything I do with my Amazon Echo. It played New York City’s NPR station from TuneIn when I asked it to “Play WNYC.” And it had no trouble relaying the weather when I asked. (That might sound dull, but it’s something I end up asking my Echo several times a day.)
The Invoke’s biggest weakness at this point is the limited selection of audio streaming services that Cortana works with. So far, the list includes Spotify, TuneIn and iHeartRadio. There’s no Pandora support yet, which is a big disappointment, considering that this is being positioned as a music-first device. Still, Microsoft says it’s in talks to sort that out. The company also intends to work with other services like Soundcloud and Deezer, but it’s unclear when we’ll see those available on the Invoke. In Spotify, the speaker found my Discover Weekly playlist when I asked for it, and it also easily played music from specific artists and albums. In addition, it’s a Spotify Connect device, meaning you can control what the Invoke is playing from any of the service’s apps, either on your computer or your mobile.
I’ve mentioned this already, but it’s worth repeating: The Invoke sounds fantastic. Music from every genre sounded immersive, with detailed mid-range, crisp highs and some decent low-end thump. It can easily fill a room — but more than that, it does so in a way that’s enjoyable. It sounds more like a decent bookshelf speaker than a mere smart gadget. The better sound quality also makes radio shows and podcasts sound more natural. The Invoke simply blows the original Amazon Echo away. I haven’t tested out the new model yet, though, which is supposed to sound better. 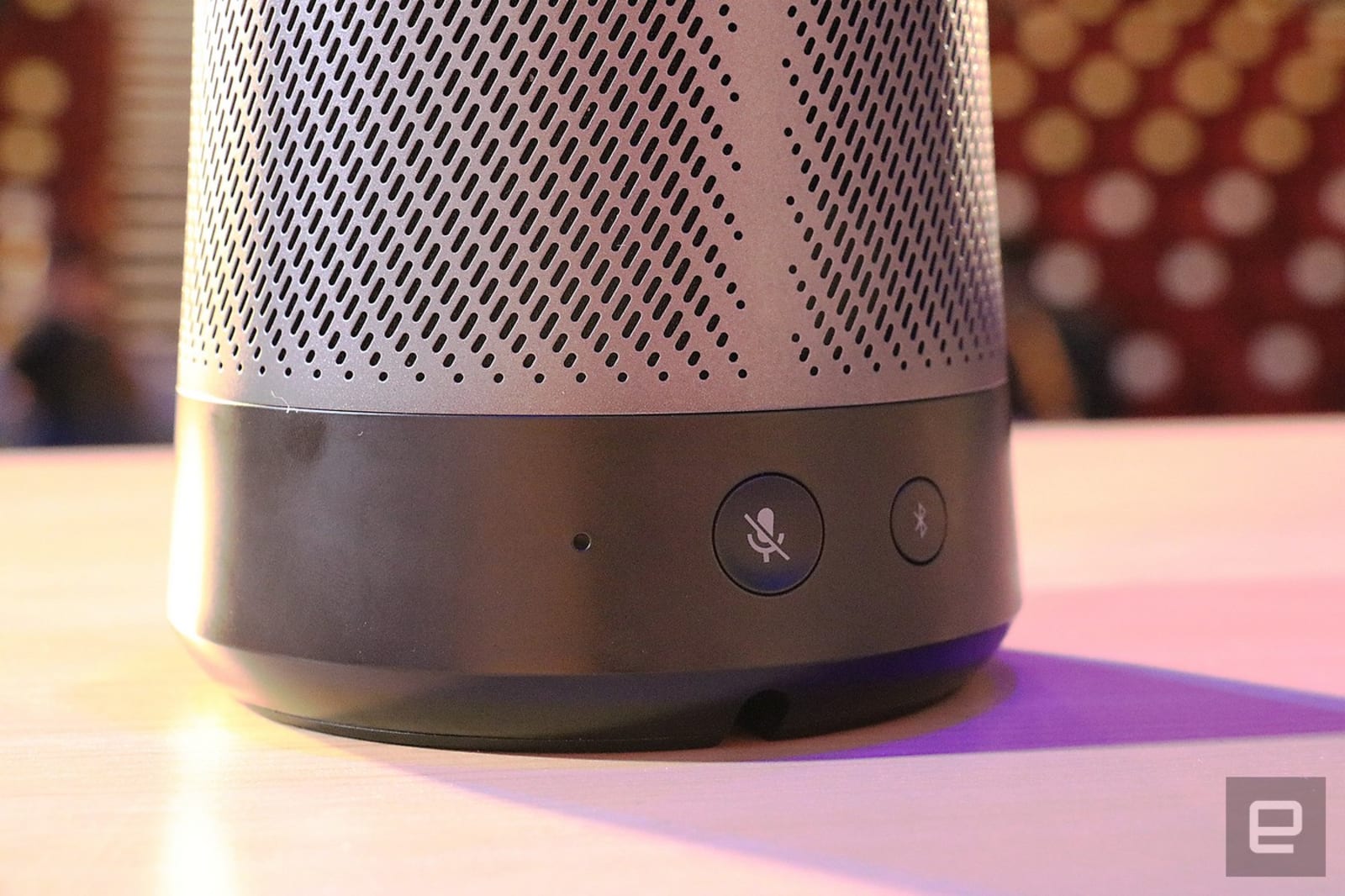 I’ve listened to the Echo daily for years, and generally I’ve found it good enough for casual listening, but that’s it. The difference between Amazon’s speaker and Harman Kardon’s is readily apparent when you switch between the two (which is pretty easy using Spotify Connect). With Flying Lotus’s tracks in particular, the difference between the two was stark. The Invoke’s audio is much richer and nuanced, while the Echo sounds cheap and flat by comparison.
Cortana’s voice also sounds much more natural than Alexa at this point. When I asked her to tell stories and jokes, it was difficult to notice that I was listening to something artificial. Some Cortana responses are also read directly by her voice artists, which also helps to sell the illusion of her being more than a machine. Alexa is steadily getting better, but it still sounds vaguely robotic.
Amazon’s voice assistant wins out when it comes to controlling smart home devices, though. Cortana works with Wink, Nest, SmartThings and Hue, but it doesn’t integrate with devices from Sonos or Logitech’s Harmony platform like Alexa does. I was also disappointed with how unreliable Cortana was when it connected to my Philips Hue smart lights. At first it had no problem turning lights on and off, or changing scene colors. Several hours later, though, it stopped working entirely. Resetting my Hue Hub and all of my settings didn’t help; it’s as if Cortana got into a fight with Philips and refused to talk to my lights anymore. I’ll chalk this up to growing pains for now, but I hope Microsoft irons out these issues soon.
Devindra Hardawar/Engadget
Since Amazon has had a head start in the smart speaker arena, it’s managed to get developers aboard faster. Altogether, they’ve built more than 20,000 Alexa skills. Microsoft only opened up Cortana’s Skills API in May, and it launched with just 46. That number is growing, but it has a long way to go before it catches up to Alexa. The surprise partnership between Microsoft and Amazon, which will let the two virtual assistants chat with each other, could be a big help for Cortana. But we still don’t know how, exactly, that integration will work, or when it’ll be available.
One unique feature the Invoke offers is Skype calling. You can call other Skype users directly, along with normal phone numbers in your contacts and local businesses. When I asked it to call a friend, it found the appropriate contact and dialed the number without issue. He was able to hear me clearly, but he noted that it sounded like a speakerphone. The Invoke also comes with unlimited Skype phone calling, so you don’t have to worry about buying credit to make domestic calls.
While you can make calls to other Alexa users with an Echo, that’s not nearly as convenient as ringing a normal phone. Amazon’s Echo Connect changes that a bit, but it requires a landline. Unfortunately, while you can pair your devices with the Invoke over Bluetooth for music playback, you can’t use it as a speakerphone when it’s connected to your smartphone. (But that’s something the Echo can’t do either.) 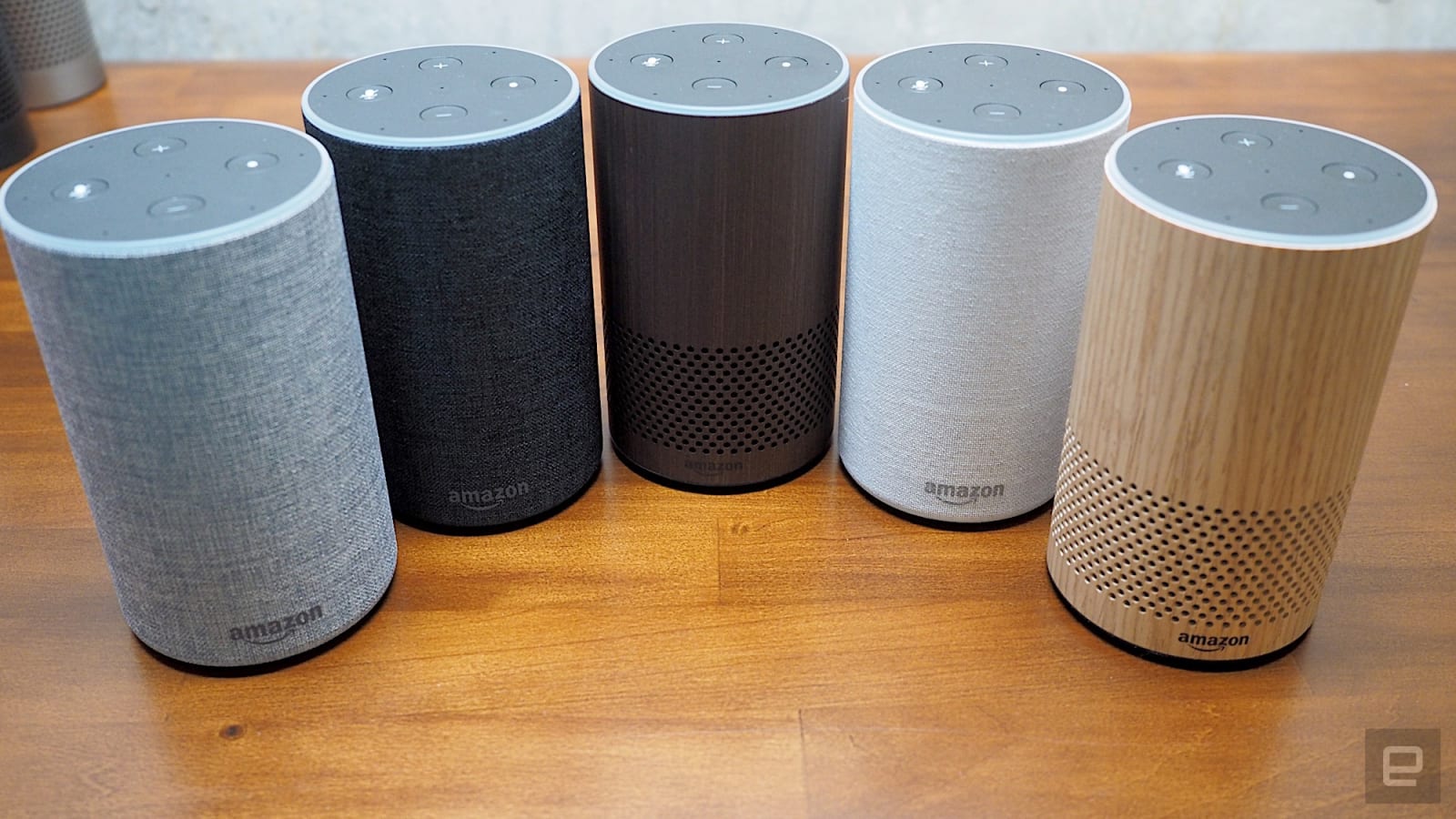 The Invoke’s $199 price puts it at twice the price of the new Echo, and $50 more than the smart-home-hub-equipped Echo Plus. It’s also significantly more than the $129 Google Home. Still, it’s cheaper than Apple’s $349 HomePod, which is also aiming for high-quality sound.
Really, though, your choice with all of these smart speakers really comes down to which ecosystem you want to be a part of. If you want something that works with the most services possible, then Amazon’s Echo line makes more sense. Android fanatics might be better off with Google Home and its integration with that company’s virtual assistant. Logically, you can assume the Invoke works best for Windows users. And while that’s true, it’s also a compelling option for anyone who values music quality. With Cortana available on iOS and Android, you don’t need a Windows PC to take advantage of this speaker. 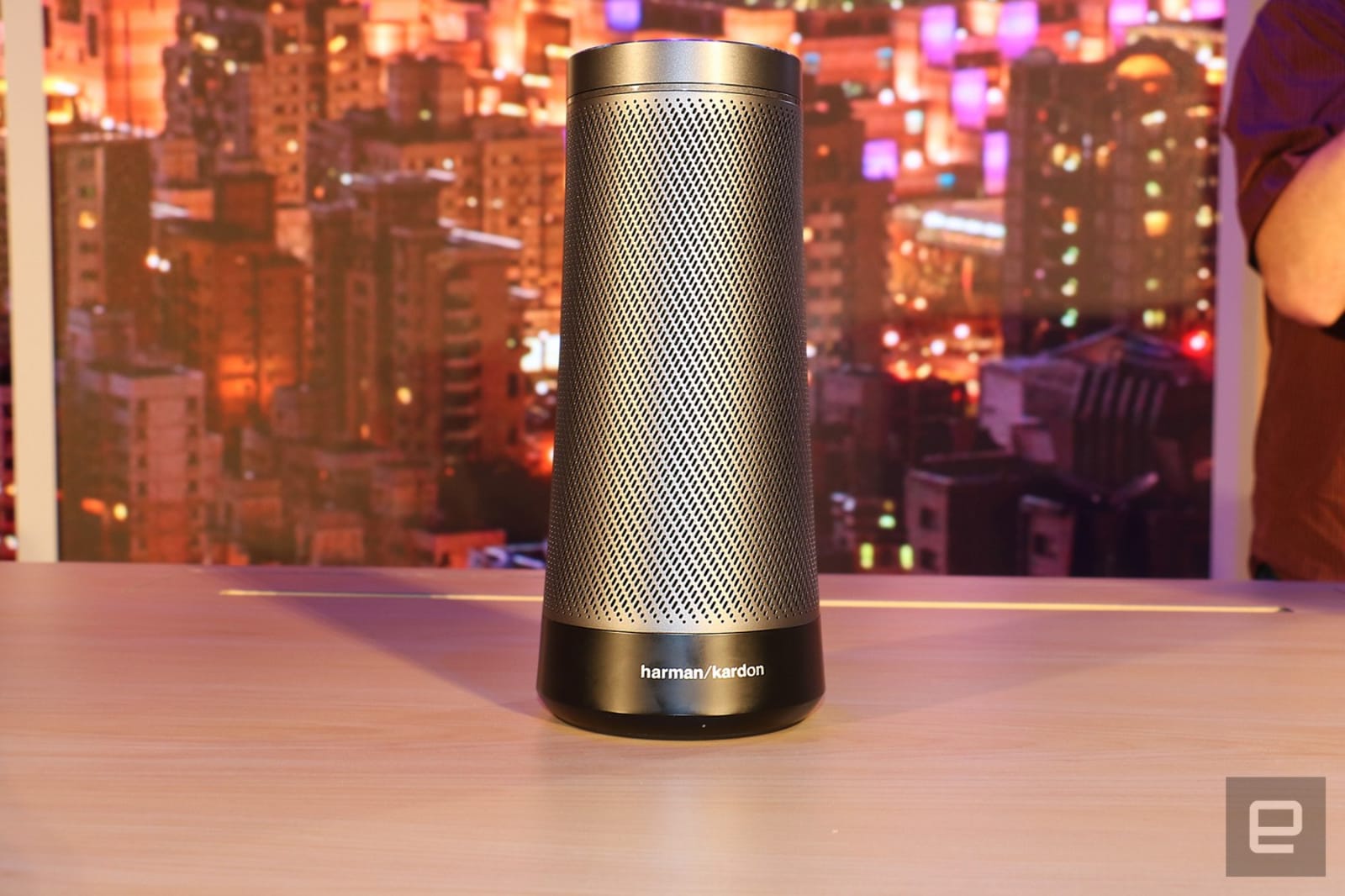 The Invoke is a great piece of hardware hamstrung by Cortana’s fledgling ecosystem. It could get better over time, but most consumers would likely be better off with a competing smart speaker that might not sound as good but can do much more. But if Cortana catches up and the Invoke’s price goes down, it could end up being a truly compelling smart speaker for music lovers.
Please enter a valid email address